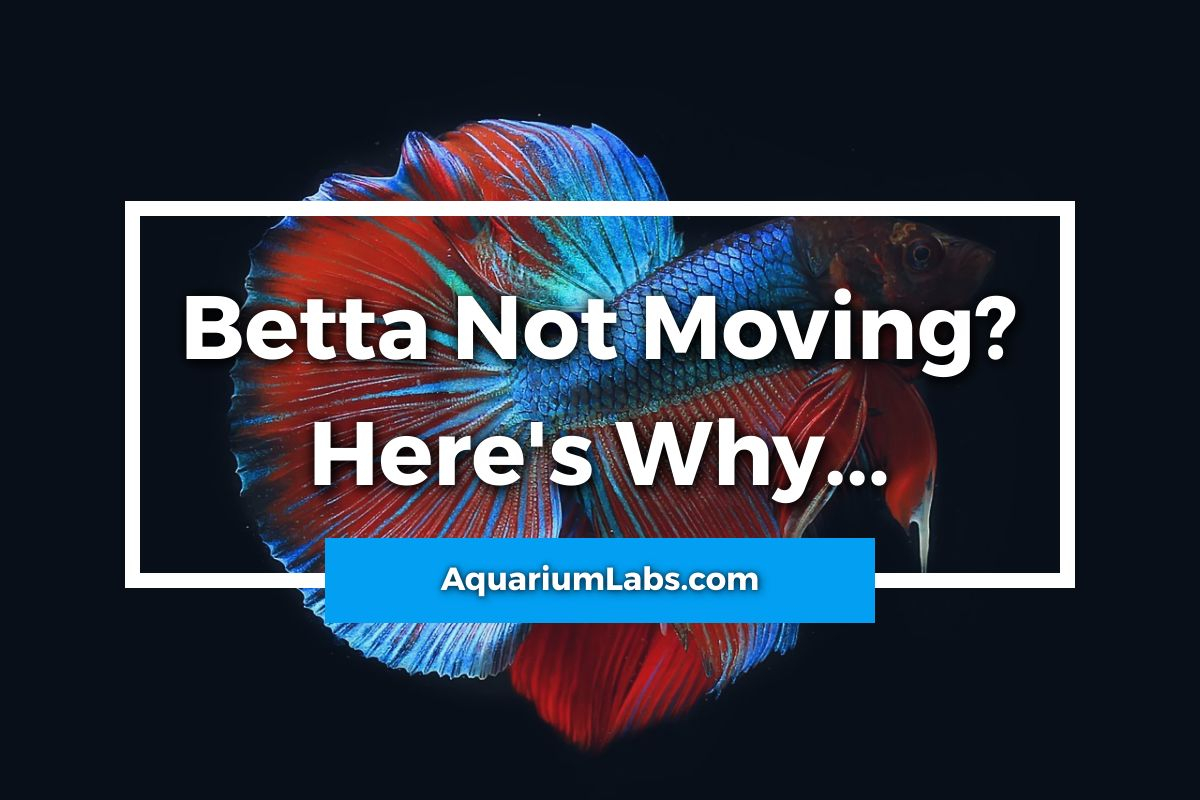 As any betta keeper will come to realize, these fish love to spend a lot of time not actively swimming. They can commonly be found lying on their stomachs as they eye a potential snack or take a moment to rest.

They will usually spend most of their time lying on plants but can also take a break along the bottom of your tank.

Swimming Along the Bottom of the Tank

This resting habit is entirely healthy and not a sign of your betta being sick. Betta fish are much more variable in swimming habits than most other fish. They will dart around the middle of the tank, only to rush to the surface to take a breath. And then swim straight to the bottom until betta tank mates recapture their attention.

If you find your betta fish laying along the bottom of the tank or a plant’s leaf first thing in the morning, then he or she was almost certainly sleeping there. Fish don’t always wake up the moment you turn the lights on.

Bettas also take time to rest more often in aquariums with plenty of live or fake plants! This is actually perfectly aligned with their nature: bettas are found in bodies of water choked by thick plant growth in the wild. They have long bodies in order to wriggle through the plants as they search for mosquito larvae and other small invertebrates. So taking time to rest as they navigate the maze of your decorations is completely natural!

When people ask me, “why is my betta fish not moving?” the first thing I ask is, “have you checked the water parameters?” Poor quality aquarium water is a major reason why betta fish stop wanting to swim. They are very resistant to high ammonia levels but not immune to the pollutant. All fish release ammonia as a waste product, which is normally then processed by your filter.

If you haven’t kept up with regular filter maintenance, the unit can become overwhelmed by trapped waste, which will cause ammonia levels to rise. Common signs of a betta suffering from ammonia poisoning include mucus patches, irritated red blood vessels in the fins, and not responding to an external stimulus, like moving around the aquarium. It will also stop feeding and swim slowly or not at all.

If you perform a test using a test kit and detect poor water conditions, you can fix the issue by performing an immediate water change.

Cold water is one of the most common reasons why bettas stop swimming and start laying at the bottom. Temperature is critical for fish because they are cold-blooded and rely on environmental heat to fuel their metabolisms. If their water grows cold, their bodily functions slow down with the lack of heat. This can lead to all sorts of problems, with the most obvious sign being an unwillingness to swim around.

Other signs include fin rot, intestinal, and swim bladder issues that arise from microbes that the immune system of your betta fish can no longer fight off as the water temperature drops. Unfortunately, too many aquarists are told that “betta fish don’t need a heater“ since this encourages people wanting to keep a beautiful pet for little money. Bettas are tolerant of cold water, but it’s very bad for them over the long run. They are originally from the warm parts of Thailand, where they rarely experience temperatures below 72°F for long.

Room temperature in temperate countries often runs as low as 65°F; a perfect setup for a lethargic betta that will be plagued by diseases and will conserve energy by not wanting to swim. Temperature shock is very easy to correct: simply get an appropriately sized heater for your betta! Betta fish thrive when kept between 75-84°F. Since you likely have a smaller aquarium for a lone male betta, use a mini heater rated for a tank size of 1 to 5 gallons!

Is your betta or its tank mates breathing heavily? If so, it’s possible dissolved oxygen levels in the tank have dropped. Bettas will generally not do this because they have a labyrinth organ that allows them to breathe atmospheric air. The air we breathe is around 100 times richer in oxygen than water. This allows bettas to thrive in hot, shallow, stagnant water that insect larvae love but most fish can’t survive in. So bettas won’t gasp often, but your other fish will if oxygen levels are low.

If your betta is breathing heavily, it’s more likely that your nitrate levels have become a problem. Betta fish are very resistant to nitrates but not entirely immune. Once nitrate poisoning starts to take hold, you’ll see the betta’s gills turn brown as they lose their ability to carry oxygen. If ignored for too long, this will become fatal, even for an air-breathing betta. Fortunately, nitrate poisoning is easy to fix: perform proper maintenance on your filter and a 50% water change. Then, retest the parameters and perform more water changes as needed to bring nitrate levels down to a safe level (less than 15 parts per million).

Swim bladder disease is one of the more common diseases bettas get. The swim bladder is an internal organ that controls buoyancy in fish. You can identify a swim bladder issue when a betta is seen struggling at the surface as if it is too buoyant. It may try to fight and swim hard to the bottom of the tank, only to float back to the top, exhausted.

Swim bladder disease is tricky to treat because your betta fish may only have hours or days left to live by the time you identify it. But there are a few ways you can increase your betta’s chances of survival!

Swim bladder problems are almost always a sign of an inner bacterial infection. Therefore, we want to first perform a major water change and then treat the tank using a broad-spectrum antibacterial remedy.

Watch your betta to see if he will eat normally. Being willing to eat is good news because it is a sign that he will recover if given a few days and clean conditions. The temperature should be increased by a few degrees; this speeds up his metabolism, helping him fight off the infection.

One should always watch out for fungal infections like fin rot. Fungal diseases appear as cottony patches on the body, fins, eyes, and mouth. Usually, a betta has to have an open wound in dirty water for fungus to show up. Once it takes hold, you need to treat it immediately. Fungus isn’t immediately fatal, but the fish is already fighting a losing internal battle with the fungus once you can see it.

Constipation issues can also be a reason why you see your betta fish laying on the bottom of the tank. Usually, constipation happens when a betta fish is kept in cold conditions. Its digestion is too slow to efficiently process food before intestinal bacterial can start feeding. This can cause bloating to arise, trapping food inside. Constipation is often mistaken for a swim bladder disease because it can also result in belly swelling and the betta fish to start floating.

if this happens, the treatment is the same as for true swim bladder disease: raise the temperature and medicate using an antibacterial remedy. Contrary to what you’ll read all over the internet, do not offer your betta fish blanched peas, a shelled pea, or any other kind of peas. Bettas are carnivores, firstly. They don’t eat plant matter – and even if they do, the fiber will likely contribute to internal gas and make the problem worse.

What you can do is feed live or thawed daphnia (water fleas)! Daphnia are tiny crustaceans that are a natural food source for bettas. They are also mostly made of shells, which passed through the digestive tract intact. A nice meal or two of daphnia contains enough protein to be nutritious but will also help move things along inside! Once the intestines are working properly, your betta should stop laying on its side and begin to feed normally!

Older bettas, like all animals, will eventually start to slow down as they age. Even when kept warm and fed well, you’ll often see them lie on the bottom of the tank breathing heavily simply because they need a break. As long as you are providing healthy water parameters, warm temperatures, and good food, there is no need to worry too much about your betta fish!

A Dying or Dead Betta

Sometimes, despite all of our best intentions and skills, a betta will begin to die. Perhaps it has reached the end of its natural life span. Or maybe a disease was too subtle and swift for us to treat.

You may see the betta fish lying at the bottom of the tank. But a betta fish floating in the tank upside down but not quite dead is likely on its way out as well. At this point, there is little you can do your betta other than ensuring that the conditions are comfortable. He may be able to fight and survive if dealing with a common illness, but it’s unlikely at this stage.

There are several reasons why your favorite betta fish might be found at the bottom of the tank. The most likely reason is that it is simply taking a moment to explore its environment. Bettas don’t need to swim constantly as other fish do.

But if your betta fish is spending most of its time not moving, then there maybe be an underlying problem. Some problems that need addressing include temperature shock, nitrate or ammonia poisoning, and internal diseases of the swim bladder or intestines.

Or perhaps your betta is simply getting old and wants to take time to rest. Regardless of the reason, it’s always a good idea to double-check your aquarium parameters and study your betta fish to ensure there is no cause for alarm!